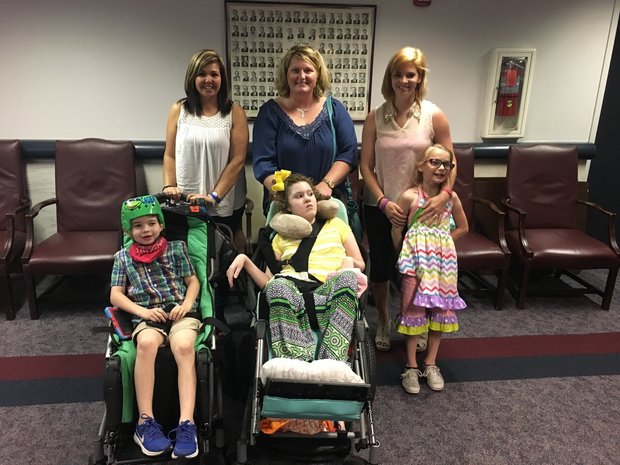 Families who helped push through the passage of Leni’s Law were at the Alabama State House on Wednesday. From left are Meggan Jackson of Lester and her son, Caden; Kari Forsyth of Athens and her daughter, Chesney; and Brittany Townsend of Hueytown and her daughter, Kenna. (Mike Cason/mcason@al.com) ( )

Gov. Robert Bentley has signed into law a bill to allow people with debilitating medical conditions to use cannabidiol, which is made from the same plant as marijuana.

The bill, known as Leni’s Law, expands on a bill passed two years ago, known as Carly’s Law, that authorized a UAB study on using cannabidiol to treat people with severe seizure disorders.

“As a physician, I believe it is extremely important to give patients with a chronic or debilitating disease the option to consider every possible option for treatment,” Bentley said in a statement.

“With Leni’s Law, citizens in Alabama will have access to cannabidiol that may help with treatment.

“Through a study at UAB, we have seen the benefit of cannabidiol to help with chronic seizures. I hope we will be able to collect information that will determine the efficacy of this substance in other chronic debilitating diseases.”

The bill is named after Leni Young, whose family moved to Oregon so she could use cannabidiol to treat her seizure disorder.

Leni’s parents and other parents who believe their children could benefit from cannabidiol drove grassroots efforts to pass both Carly’s Law and Leni’s Law.

Many have made repeated trips to the State House to meet with legislators.

Preliminary results from the UAB study indicated that 50 percent of participants showed improvement in seizure control.

As legal US cannabis sales soar, start-up reality sets in
May 2, 2016
Follow us on Instagram
This error message is only visible to WordPress admins